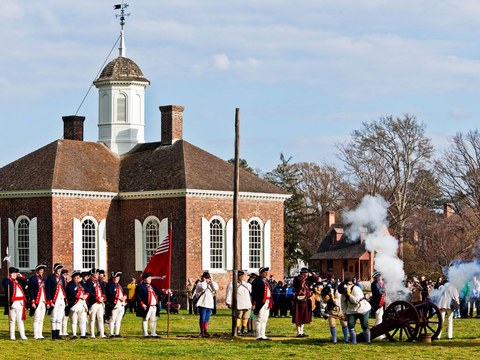 Since late last year, Jamestown Rediscovery archaeologists have been excavating the Memorial Church, built in 1907 over the foundations of three 17th century churches, the earliest being the 1617 timber-frame church in which the Jamestown colonists held the first representative assembly in English North America in 1619. (The second was built in 1640, the last in 1680.) The site was excavated in 1901 by the Association for the Preservation of Virginia Antiquities (today known as Preservation Virginia) before construction of the Memorial Church. The foundations of the 1617 church were discovered in that dig, but archaeological priorities and methods were different then, and the APVA team poured concrete between the remains of foundation and wall thinking it would keep them intact. Archaeologists today are removing the concrete (no small task — some sections are as much as five feet deep) to uncover elements in the soil that their predecessors wouldn’t have noticed or cared about but that contain potentially significant information about the construction of the 1617 church.

One of the aims of the new excavation is to conserve a unique ledger gravestone (a marker that lies horizontally covering the full length of a grave) known as the Knight’s Tomb. Moniker notwithstanding, there is no knight, or anyone else for that matter, buried under the stone. There was originally, but sometime in the 17th century it was moved to the chancel aisle, just inside the doorway of the brick church, and recycled as a paver. It is the only surviving ledger stone in the United States.

The slab is six by three feet in dimension and has inset carvings which once held brass plates that identified and glorified the deceased. You can see the bolt holes that once affixed the plates to the stone. In the upper right hand corner is a shield, whose brass inlay would have been a family crest. Across from it is a scroll, and in the middle is a knight in plate armor standing on a rectangular pedestal which likely contained the full funerary inscription.

Because of the loss of the brass plates, researchers aren’t certain who the knight in question was, but there aren’t a ton of candidates. There are in fact only two knights who were buried in the 1617 church: Thomas West, Lord De La Warre, who died on the transatlantic voyage and was buried in Jamestown in 1618, and Sir George Yeardley, who actually managed to land in the Americas alive and well. He was Governor of Virginia during that first General Assembly meeting held in the original church in 1619. He died in 1627 and was buried in the church.

“When you’re studying mortuary practices, when you’re studying monuments, you never want to go to the records of the person who died, you want to go to the records of their offspring, of their family members who are still living,” said [Assistant Curator with Preservation Virginia Hayden] Bassett. “They’re the people who are largely going to be dealing with the logistics of getting a massive stone over here.”

Bassett said after searching through the journals of both men’s extended families, he thinks Preservation Virginia may have found mentions of the stone by Yeardley’s step-grandson Adam Thorowgood II, whose mother married Yeardley’s youngest son, Francis.

“What they mention is that they would like to have a black marble tomb with the crest of Sir George Yeardley and the same inscription as upon the broken tomb,” Bassett said. “We believe that might reference this stone.”

It was unearthed by the APVA in the 1901 dig. Its brass plates were long gone by then, and the stone was broken in several fragments, all of them quite large, one of them the full bottom half of the stone. They decided to keep it pretty much where they found it, moving it just a foot south. To seal it in place and fill the joins between the fragments, the team poured Portland cement around it and into the cracks. People loved their Portland cement back then because it’s so hard and durable, but as a preservation material it’s unfortunately terrible. The contrast between its hardness and the more porous, softer period materials causes moisture problems and puts undue stress on the historic structures.

The Knight’s Tomb is no exception. To ensure its long-term health, Jamestown Rediscovery archaeologists knew they’d have to get it out of that cement trap and into the hands of modern conservators who use materials that can be reversed should they cause problems down the line. On April 10th, conservator Jonathan Appell of of Atlas Preservation, an expert in the conservation of historic monumental stone memorials and gravestones, began the difficult job of releasing the ledger stone.

The cement around the edges of the gravestone was hand-chiseled away. Thankfully, the people who installed it in the floor of the Memorial Church in the early 20th century did not set it in a bed of Portland cement. Instead it was placed on slate shims over a mortared brick base, so once the cement was removed from the sides and under the edges, the stone could be pried off its base relatively easily. Once the Portland cement was gone, the stone came up in the same fragments it was first found in back in 1901. Very carefully and painstakingly, the team moved the stones up wooden ramps onto a platform where the detailed conservation will take place.

You can see some of their hard work explained by Jonathan Appell in this wonderful video on the Jamestown Rediscovery YouTube channel:

That YouTube channel is a gem, very much worth following and/or bookmarking. They have several videos documenting the current excavation of the 1907 Memorial Church.

Unrelated to the church and its tombs, this video about the discovery and conservation of the most complete set of jacks of plate (an armoured vest of overlapping plate sewn onto canvas) in the United States is just plain cool.

Book Now!
We use cookies to ensure that we give you the best experience on our website. If you continue to use this site we will assume that you are happy with it.OkPrivacy policy