Posts in battle of williamsburg tour

The Peninsula Campaign And The Battle Of Williamsburg

The Civil War Battle Of Williamsburg..was a key part of the Peninsula Campaign. The civil war’s early days set the tone for the bloody struggle that would cause so much trauma to not one nation, but two. The Peninsula Campaign was the campaign that encompassed the Battle Of Williamsburg. The Union plan to flank Richmond from the East would be marked with logistical struggles and human tragedy.

In many ways the Peninsula Campaign was a continuation of Union woes. A hesitant Union commander named George McClellan was not aggressive enough to really challenge the tactical expertise of the Confederates and as such never really commandeered the battlefields of the lush woodlands of Eastern Virginia.

Like so many Union offensives, it represented a slow beleaguered advance toward an objective. A key point in that objective was the Battle of Williamsburg.

Union Strategic Goal Of The Peninsula Campaign: Get To

On paper the Union Army strategic goal seems very simple. Attack the east flank Of The Confederacy in the vicinity of the Confederate Capital. Use larger manpower to overpower the Confederacy and force them to defend a critical strategic position. From there use siege tactics to grind the Confederate capital and army into submission. Of course the devil is in the details.

It would take the prodding of the President Of The United States to get General McClellan Of the Union to even go on the offensive. McClellan’s natural tendency was to dig in and not aggressively pursue his enemy. Regardless the Peninsula Campaign would quickly fade into the backdrop as the Confederates pursued future strategic moves of their own.

Find Out The Truth

Williamsburg Walking Tours focuses on what actually happened at the Battle Of Williamsburg during the Peninsula Campaign. This is history as it actually was, not historical marketing that sugarcoats the truth.

Learn About The Civil War Peninsula Campaign At Your School Or Business. We can bring the tour to you.

More On The Battle Of Williamsburg And The Peninsula Campaign

Here are more articles on the Battle Of Williamsburg: 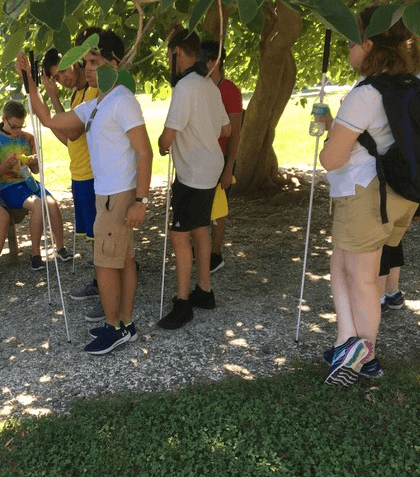 For the third year, Williamsburg Walking Tours hosted 30 students from the Virginia Department for the Blind and Visually Impaired for a special 1 ½-hr. tour. On Saturday, July 20, 2019, Co-Owner and Master Storyteller Trish 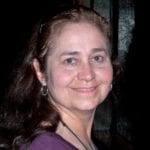 Thomas entertained the group with little-known facts about Williamsburg drawn from the company’s repertoire of stories from its tours which include:

Thank You To The James City Lions!

On an extremely hot day, the James City Lions graciously provided water and guide assistance for this remarkable tour. Private tours and customized on-site presentations are available for family, civic and other groups visiting Williamsburg.

Call 757-634-2452, visit TripAdvisor to see reviews, or go to our Williamsburg tours page for more information.

The Occupation Of Williamsburg

To understand the occupation of Williamsburg put yourself in

A year ago you lived as a free woman in peace. You went to the market, to church, and to your home without any thought of safety, food, or your future. Times were good. Food was plentiful and you are healthy. Now it is 1862.

A Foreign Army Is Occupying Williamsburg

This is the reality of your hometown of Williamsburg Virginia. It is occupied by troops you despise. They wear a different color than those of the soldiers you support. They are in every street, every public building, and every place you go. They are your sworn enemy. The town is filled with refugees from Hampton, victims of the conflict caused by this invading army. They hang a flag you do not pledge allegiance too. It is the flag of the army that has invaded your town. The flag of the enemy is the stars and stripes of the United States Of America. They are the invaders of the South, or so this how you see it.

Welcome To The Occupation Of Williamsburg

The Confederate Army In Williamsburg

The Confederate Army held Williamsburg for a very short time. Regardless, the territory, and a large number of the people that were denizens there, were loyal to the Confederacy. The true impact of this becomes very clear when you see daily life for the average Williamsburg citizen who lived most of the war under Union occupation.
Many citizens had open hostility and aggression toward the occupying Union Army. Many sympathizers would find ways to signal the Confederates of Union positions and movements. At times this aggression would come into the open with raids on Union positions in Williamsburg. There was limited interaction between many citizens and the uniformed representatives of the occupying Northern Army.

Learn About These Perspectives On Our Civil War Tour

Williamsburg Walking Tours helps you discover the truth, one story at a time. Our Civil War Tour, known as Richmond Was A Hard Road To Travel illuminates history in its plainest and often most honest perspective. From stories of struggle, to insights on the battle itself, you will discover history in a new way. 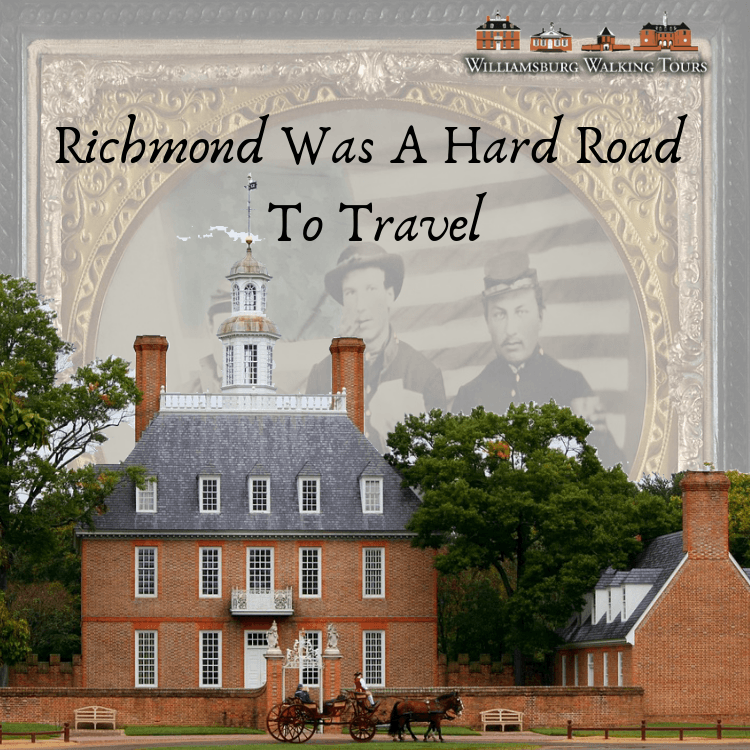 The Battle of Williamsburg Campaign: Boundaries And Battlelines

The boundaries or battlefield area of the Battle of Williamsburg stretched from Jamestown to Yorktown. The apex of the battlefield would be Fort Magruder in Williamsburg. This would be the South’s position that they would have to hold in the Williamsburg Conflict.

How The Battle Of Williamsburg Boundaries Formed

The Battle of Williamsburg boundaries form as the Union, centered around Fort Monroe, threaten to move up the Virignia Peninsula. This would start in Hampton and move progressively West through the Peninsula towns of Newport News, Yorktown, and subsequently, Williamsburg.

From The Peninsula To Richmond..

With Richmond, the current confederate capital in 1862, only 51 miles away, the need to block this advance was critical. Thus, the Battle of Williamsburg would be a key conflict point between the two armies.

Battle of Williamsburg: Key Point In The Peninsula Campaign

The Peninsula Campaign is the bigger picture in this Williamsburg Civil War clash. The Battle of Williamsburg marks a key clash in the Union’s advance towards Richmond. The Union goal was to come up the Eastern Peninsula to get to the Confederate Capital in Richmond. The Confederates slowed this advance by clashing in Wiliamsburg. The Union pursued them but was unable to foil their tactical retreat back up the Peninsula. Other battles would ensue but ultimately the Union would come up short in their quest of a Richmond conquest and Confederate defeat in 1862. 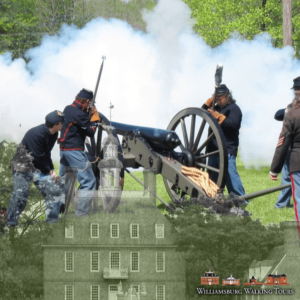 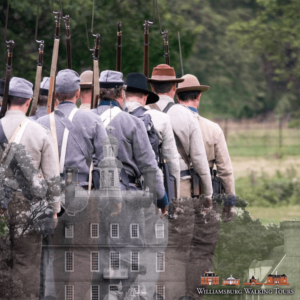 Looking for more information on the Battle of Williamsburg?

Check out our tour, Richmond Was A Hard Road To Travel for an in depth, on site look at this often forgotten key to the Peninsula Campaign. Also check out this article on the Battle of Williamsburg for a quick strategic overview of the strategic impact of this Virginia Civil War conflict. 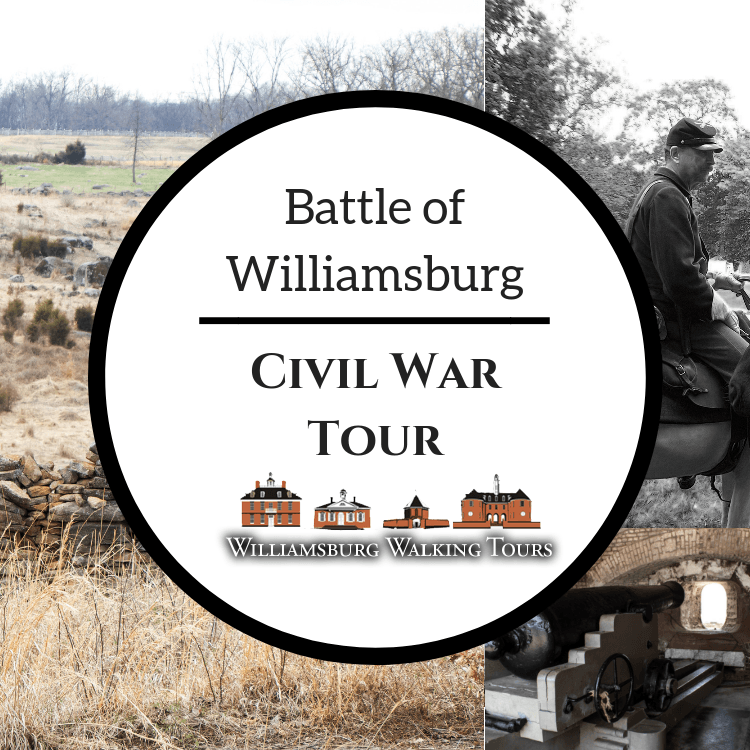