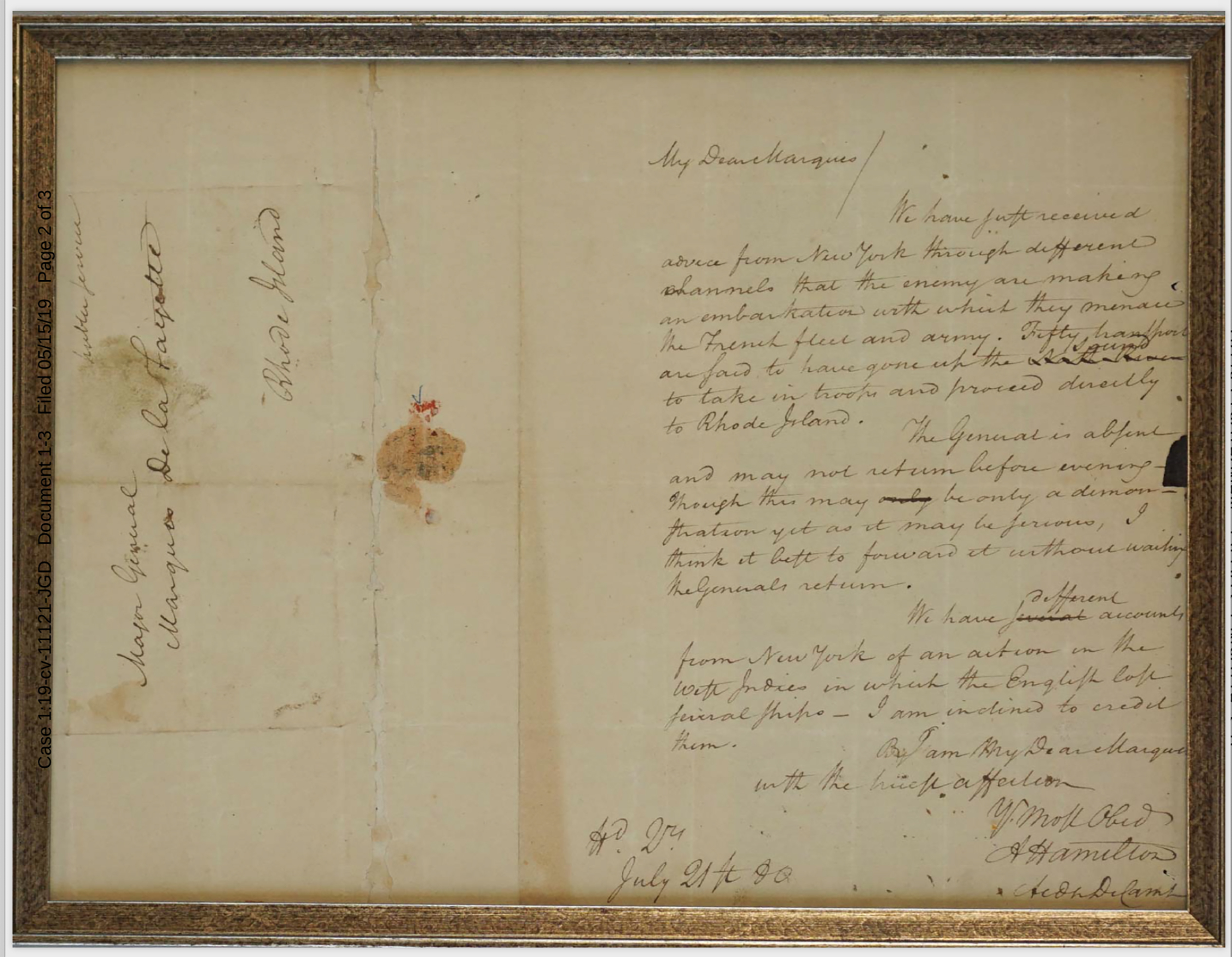 A letter by Alexander Hamilton to the Marquis de LaFayette that was stolen eight decades ago has been found. It was stolen from the Commonwealth of Massachusetts Archives by clerk Harold E. Perry between 1937 and 1945. After he was caught, he claimed to have stolen the documents as a “collector,” but he just so happened to have made quite a career from trafficking in looted history. He also stole original papers of George Washington’s, Benjamin Franklin’s, Paul Revere’s and, fittingly, Benedict Arnold’s. The thefts weren’t found out for years.

Perry was arrested in 1950, but by then he’d sold documents to dealers all over the country. He removed Archive reference numbers to obscure their origins. The Massachusetts Attorney General sent letters to all the major dealers alerting them to thefts and seeking the return of any stolen materials. Some of them were recovered. The Hamilton letter was not.

It was rediscovered when the document was consigned for sale to an auction house in Alexandria, Virginia by a South Carolina family in November 2018. The letter was valued at $25,000-35,000, but it never went under the hammer because a researcher at the auction house discovered the letter was missing from the Massachusetts Archives. They alerted the MA which provided documentation of the theft and then the auction house called the FBI.

The would-be consigners had no idea they had attempted to fence stolen goods. They inherited it from a relative who collected documents. From what they know, he bought it in the 1940s from a rare book dealer in Syracuse, New York, named Elmer Heise.

The FBI in Boston is currently in possession of the letter. US Attorney Andrew Lelling has filed a civil forfeiture complaint, a legally necessary step in the process of returning the letter to the Archives. Once that goes through the court, the Hamilton letter will be back at the Massachusetts Archives.

Dated July 21, 1780, the letter was written at George Washington’s Preakness Valley Headquarters in New Jersey. Its recipient was in Danbury, Connecticut at the time.

My Dear Marquis
We have just received advice from New York through different channels that the enemy are making an embarkation with which they menace the French fleet and army. Fifty transports are said to have gone up the Sound to take in troops and proceed directly to Rhode Island.

The General is absent and may not return before evening. Though this may be only a demonstration yet as it may be serious, I think it best to forward it without waiting the Generals return.

We have different accounts from New York of an action in the West Indies in which the English lost several ships. I am inclined to credit them.

I am My Dear Marquis with the truest affection