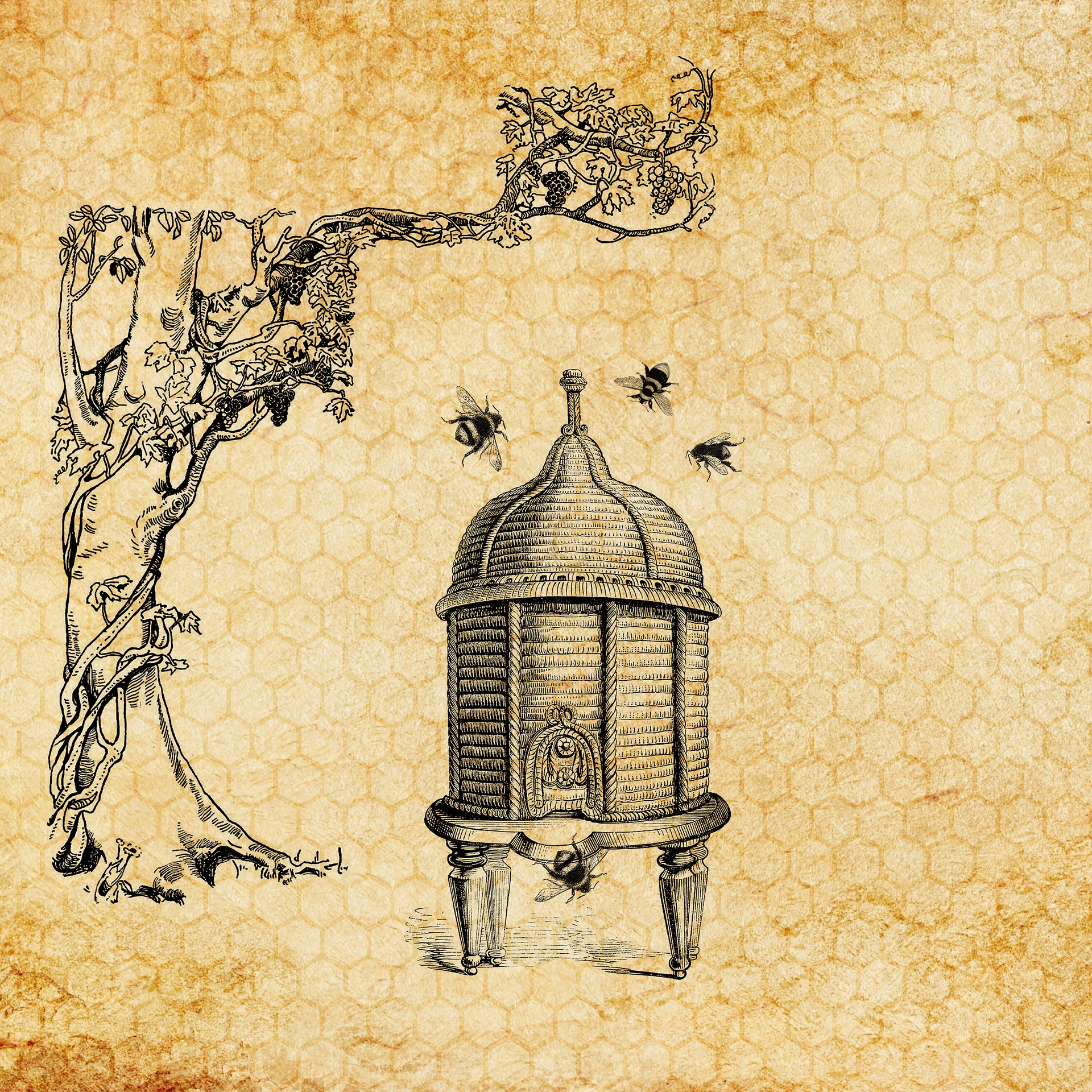 About Trish
Honeybees – Apis Mellifera -- are amazing creatures! It’s no wonder writers and poets through the centuries have been inspired by them.

Here is the place; right over the hill
Runs the path I took;
You can see the gap in the old wall still,
And the stepping-stones in the shallow brook.

There is the house, with the gate red-barred,
And the poplars tall;
And the barn’s brown length, and the cattle-yard,
And the white horns tossing above the wall.

There are the beehives ranged in the sun;
And down by the brink
Of the brook are her poor flowers, weed-o’errun,
Pansy and daffodil, rose and pink.

A year has gone, as the tortoise goes,
Heavy and slow;
And the same rose blows, and the same sun glows,
And the same brook sings of a year ago.

There ’s the same sweet clover-smell in the breeze;
And the June sun warm
Tangles his wings of fire in the trees,
Setting, as then, over Fernside farm.

I mind me how with a lover’s care
From my Sunday coat
I brushed off the burrs, and smoothed my hair,
And cooled at the brookside my brow and throat.

Since we parted, a month had passed,—
To love, a year;
Down through the beeches I looked at last
On the little red gate and the well-sweep near.

I can see it all now,—the slantwise rain
Of light through the leaves,
The sundown’s blaze on her window-pane,
The bloom of her roses under the eaves.

Just the same as a month before,—
The house and the trees,
The barn’s brown gable, the vine by the door,—
Nothing changed but the hives of bees.

Before them, under the garden wall,
Forward and back,
Went drearily singing the chore-girl small,
Draping each hive with a shred of black.

Trembling, I listened: the summer sun
Had the chill of snow;
For I knew she was telling the bees of one
Gone on the journey we all must go!

Then I said to myself, “My Mary weeps
For the dead to-day:
Haply her blind old grandsire sleeps
The fret and the pain of his age away.”

But her dog whined low; on the doorway sill,
With his cane to his chin,
The old man sat; and the chore-girl still
Sung to the bees stealing out and in.

And the song she was singing ever since
In my ear sounds on:—
“Stay at home, pretty bees, fly not hence!
Mistress Mary is dead and gone!” 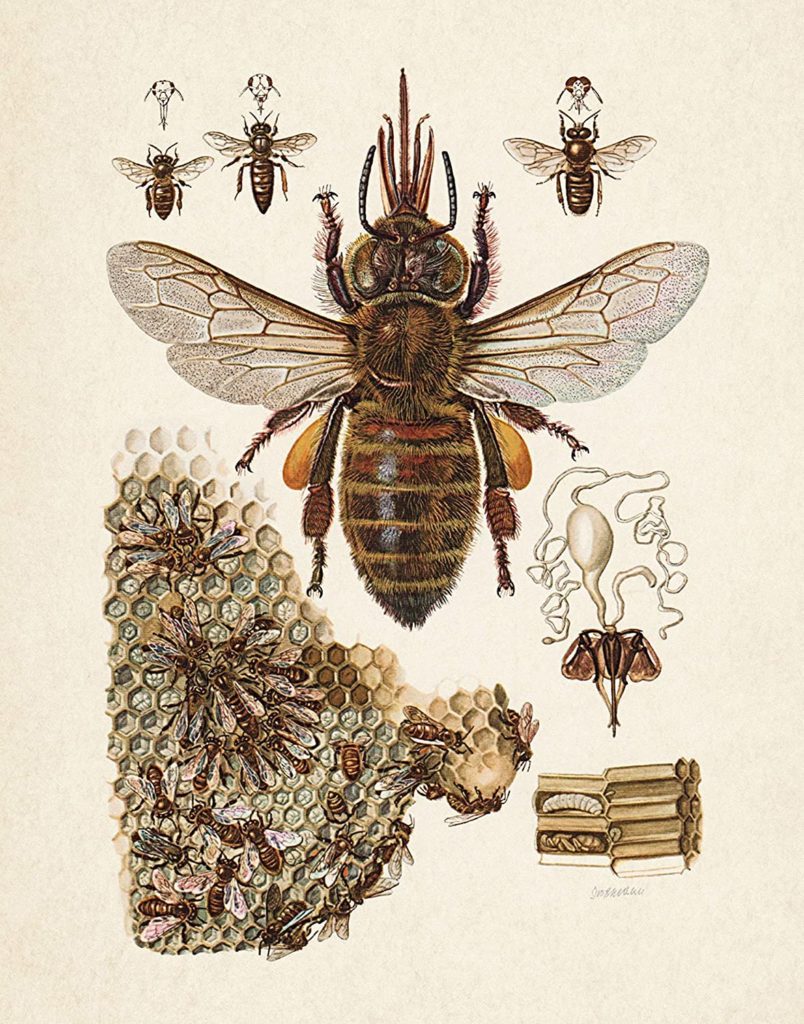 In 1858, John Greenleaf Whittier wrote a poem called, “Telling the Bees.” The poem opens with a young man returning to his sweetheart’s home after an absence of a year. As he approaches, he notices the house is clean and well kept, as usual. The trees around the house are strong and tall, as always. Everything is in good order.

Then his attention is drawn to the far corner of the garden, near the stone wall. It is there he sees a small servant girl near the beehives, singing a mournful song. The young man cannot make out all the words, but realizes the girl is telling the bees about someone from the house who has gone on the journey we all must one day travel.

As she sings, she partially covers the hives with black cloth. Someone has died. Sadly, he will find out it is his sweetheart.

What the servant girl in Whittier’s poem is doing remains a centuries-old custom from Western Europe and the British Isles called “Telling the Bees.” In Whittier’s time, once a week someone from the household would sit by the hives and tell the bees everything going on in the household.

Honeybees are extremely important to the survival of mankind. Einstein has been attributed as saying, “If the bees disappeared from the face of the earth, man would have no more than four years to live.”

Even before science was a concept, people knew how important honeybees were. The Ancient Egyptians said that when Ra, the Sun God cried, his tears became honeybees and one of their jobs was to bring messages from the Gods to humans. The people of Ancient Greece and Rome also believed honeybees were messengers of the Gods. Honeybees are mentioned in the Torah, the Koran, the Bible and the Upanishads.

Honey is a great sweetener, of course, but honey also has medicinal and antiseptic properties. Beeswax was and is used in everything from cosmetics to candles, but probably the most important job of honeybees is pollination. Honeybees pollinate 80% of the crops grown in the United States.

Everything originates someplace; honeybees originated in Africa at the dawn of history. They migrated to Asia, the Near East, into Western Europe and the British Isles. Every culture realized their importance.

However, honeybees did not migrate everywhere.

In May 1607, Captain John Smith and a group of English Colonists arrived in Jamestown, Virginia. That first year they missed the planting season; the next year the colonists planted their seeds. The soil and weather in Virginia are great for growing anything, but the English crops were stunted and not producing. When the colonists really looked around, they realized the indigenous bees of this country, of which we have many, did not know what to do with English crops.

Honeybees had to be brought to this country from England. The first group of honeybees arrived in Virginia in 1622. This year, 2022, is the 400th anniversary of honeybees coming to Virginia. With the coming of the bees came the age-old tradition of ‘Telling the Bees.” John Greenleaf Whittier’s 1858 poem shows this custom lasted for a long time.

But somehow, we forgot. Today we buy honey in glass jars from the Farmer’s Market and from grocery stores in little plastic squeeze-bottle bears. I have also noticed that when bees get near people, they tend to swat at them — at best to drive them away, at worst to kill them. No more are they known as the messengers of the Gods.

I am guilty of this too. A few weeks ago, I was sitting on my deck in the late afternoon, writing, when a bee started buzzing around me. I swatted him away but he kept coming back. When I finally took a good look at the bee, I realized he wasn’t buzzing me; he wanted some of the watered-down soda in my glass. I poured some on the table, the bee took a long drink, then came back several times. When I looked it up, I found out that on hot dry days bees will take in water, go back to the hive and pour it over the baby bees to keep them cool.

On September 8, 2022 Queen Elizabeth II died. She could be considered the Queen Bee of a worldwide Commonwealth.

The people of her realm needed to know quickly. One of the first things that happened was that the bells of Westminster Abbey started to ring, and rang for an hour. The major TV networks went blank for five or six minutes, giving the commentators enough time to change into their black mourning clothes. There were cannon and rifle salutes, processions and lots of flowers.

But if you knew where to look you would have seen, in the garden of Buckingham Palace, in a corner by the brick wall, the Royal Beekeeper John Chapple keeping the centuries-old tradition of “Telling the Bees.”

In a world where money and power seem to be all that matters, it was beautiful to see that the most important yet humble of creatures were honored.

As David says:
The bees are gone
And so are we
The Bees will return
Who will Tell the Bees