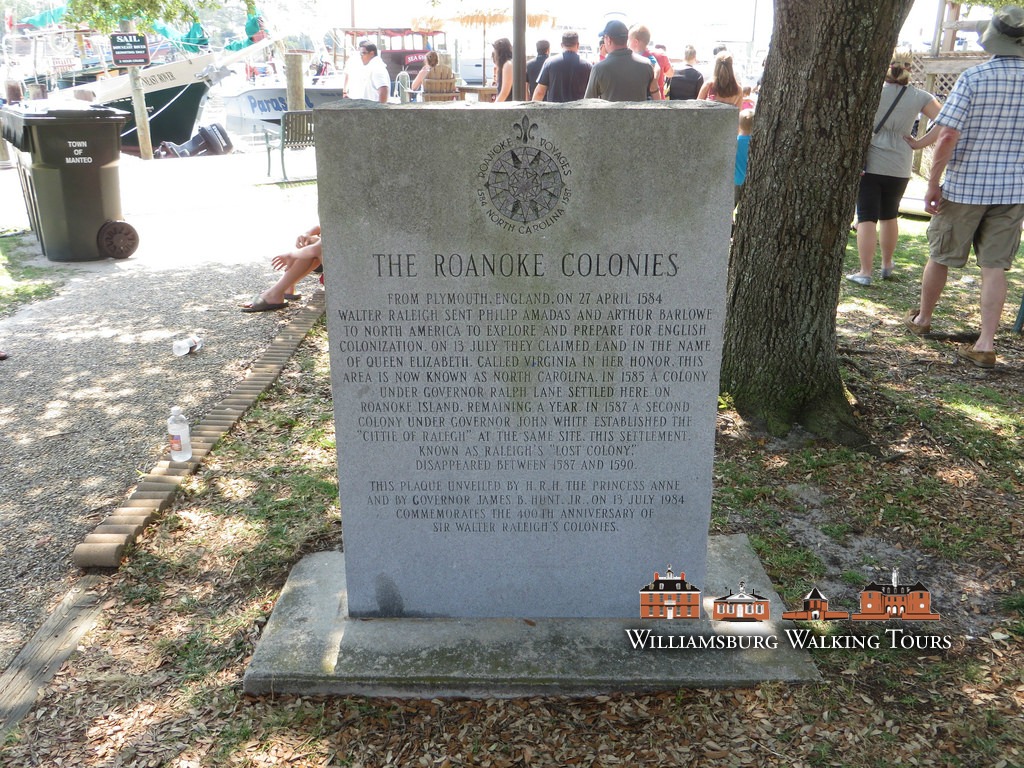 Everything is dainty bright and nice. Beautiful outfits, gorgeous wooden homes. Everything is in place to show A microcosm of a perfect day in Colonial American life. Granted it’s accurate with the exception of the fact that history is not always so nice, forgiving, or even fair.

Colonial Williamsburg is a shining example of successful colonization by the English colonies in the New World. But it wasn’t easy. It wasn’t the first try either. It was a success in a string of very difficult efforts that ended up in disappointing, even deadly endings.

The Not So Successful Colonization..The Roanoke Colony

To really understand the struggle you have to go back to the Roanoke colony in the 16th century. This was an earlier colonization effort in the New World,  in what is now modern day North Carolina. August marks the anniversary of the disappearance of this colony from the face of the Earth. Even today we have no idea what happened to them. The settlers were sent there to set up camp and found themselves in the company of indigenous peoples who were much more experienced with the land. And to the best of our knowledge probably did not see foreign settlers as a positive event when they claimed existing territory for themselves.

Even worse, it is very likely that human nature took over. Human nature in any culture, whether native American or European, can very aggressive.  How do we know that the native Americans didn’t view the colony as an opportunity for gain, human capital, and blood sport.

This is not a pleasant thought about colonization. Even in the modern day lost colony rendition of what happened, there is no deep explanation or speculation given as to what happened to them. And this omission is not because others did not think about what I am saying here. It is very likely that the disappearance was marred by tragedy, brutality, and cruelty.

Based on other experiences with colonization in the 16th century and 17th century it is very likely that one or a combination of regular events stepped in to change the destination of the colony on Roanoke Island.

The people from Europe coming to a new climate very likely encountered germs and disease. These could have had a ravishing affect on people as sickness can spread really fast. It is not unlikely that some or all  got infected and died. Disease is a factor that can not be overlooked. If you look at 5000 years of human history it is marked with 0ne group of people conquering another….everywhere. The need for power, domination and resources has influenced one group to attack another for centuries. In fact it hasn’t stopped. So it’s really possible that local groups who did not see the Roanoke Colony as visitors but invaders were targets of the opportunity to conquer.

Even in a land as big as ours it is possible the resources ran out. The Colonies limited understanding of the new world and it’s land could very well mean that they ran out of ways to get food and water. This usually leads to a migration, which is a common practice when resources diminish.

This refers to the fact that in a hostile environment or a new environment, like the  New World,people just fall away by attrition. Maybe a few of the settlers got a disease and died. Maybe a few drank unsafe water and died. Maybe a few of the Colonists went hunting or exploring and did not come back. Some may have had violent conflicts with natives. The simple fact is they could’ve just whittled down to such a small number, that they were just a handful of people foraging for survival. And yes, in that scenario it is possible a handful of them could have joined the native Americans.

This might seem cruel, but when I was a little kid seeing the reenactment of the Roanoke Lost Colony, it did not  leave me with an easy feeling. Even though I just witnessed settlers marching off peacefully with the Native Americans, I was not at ease that this was a definite, or even likely possibility. What I felt was an uneasy feeling that maybe that’s not what really happened. I was very young and my parents were not going to allow me to see anything but the Peanuts version of history. I mean can you imagine a little kid watching a bunch of people dying painfully of disease are getting slaughtered by natives or worse. It would definitely be an R-rated experience. Regardless of the very classy way of presenting it, I have never been back. I don’t want to say or think about what really happened to the people, because I intuitively feel like I know what happened to them.

This is where history gets funny. Mankind starts writing history to fix what he wants us to understand and believe, not what actually happened. I called this fantasy theory and it’s something that we do not do have on our tours because that is not what history is. Making things the way you want them to be, or to pacify feelings of guilt, disgust, or longing, is historical marketing. History is truth. History is messy. History is uncooperative.

The fantasy theory that we all want to believe is that the natives married some of the settlers, and they went off to live with them by choice. From there they must have lived happily ever after.

A Galaxy Far Far Away

I am going to put it in perspective with a hypothetical. Let’s say we colonize a planet that we’ve discovered has life or consistent life. Say you left and came back a year or two later and they’re all gone. Would you assume they just wanted off happily ever after with the local people?

Could you consider the possibility that what they thought life was going to be like on this planet was not the way it actually was  And there were some new challenges they were not ready for?

Now let’s put a different perspective on it. Let’s just say in America, in your small coastal town, a group of people just show up. They  came off a boat and you did not invite them. Then they set up camp. First they don’t look or talk like the locals. So you send an envoy to them to try and see who they are. As a prudent person you know that you have to at least protect yourself so you make preparations of defense. You and your local group and city meet to talk about who these people are. You notice that they’re using your water resources. They need part of your food. And they’re wandering your lands. Even people who are part of your community aren’t allowed to wander other people’s land without permission. So why would you tolerate this from a group that you see as trespassing.

Do you view these people as friends? Do you see them as squatters, invaders, or do you just accept you must share your land and resources with strangers?  Maybe a better question is why would you even entertain the possibility that they have any claim to your land at all?

If you continue this scenario you’ll quickly get to the conclusion that unless these people submit to you and follow your rules they don’t belong in your community. Of course, what happens when they claim your community for themselves and do not want to leave. Maybe you let them stay. Maybe you tolerate them. Maybe you remove them, albeit violently.

The point I am making is you do not see the harsh sacrifice that led to a successful colony like Colonial Williamsburg It is  more than just a beautiful microcosm of successful colonial life and colonization. It is the byproduct of sacrifice by many people to get to this point. Human arrogance, naïveté,  and just bad judgment cost lives and energy to reach this point. In fact other Colonization efforts would fail en route this success.

Real history encompasses the good and the bad. It encompasses the daily struggle, the risk, and mistakes of mankind to get to a positive outcome. When you look at the Roanoke colony you see that it wasn’t always a Peanuts Christmas but a struggle that we should be grateful they undertook.

Come learn history the real way. Enjoy your real tour of Williamsburg. This is not a PR tour or a marketing propagandized version of what they what someone wants us to say. This is truth..this is real history.