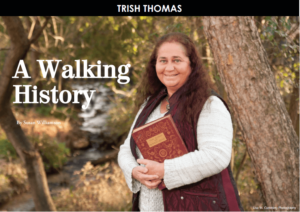 From her earliest memories of grade school, Trish Thomas has always loved history. “I was the strange child who read every biography,” she says. She grew up in Virginia Beach and embraced the history of the area. She followed her passion by majoring in history and cultural anthropology at Old Dominion University.

She met her husband, David, also a history buff, in a yoga class. While Trish worked at a variety of jobs including working for Barnes & Noble, she enjoyed working in museums and historic sites the most. As their children, Emily and Ben, grew up the family participated in Revolutionary War re-enactments as a hobby. Later, Ben also became a Civil War re-enactor. Once, Trish saw him standing asleep on a Civil War battlefield. “That was very authentic,” she says. “Conditions were so harsh that soldiers often slept standing up.” Ben, now 26, works as an electrician.

Emily played fiddles and the hammered dulcimer. She is now 28 and works as a costume designer, a skill she learned from Trish. “We took ballet from the same instructor. A Russian ballet costumer taught me how to make costumes, and I shared with my daughter,” Trish says. “Emily makes mostly anime costumes.” For ten years, Trish worked at historic houses in Virginia Beach. An older woman at one of the houses encouraged her to learn to “dress” flax, the process by which one readies flax for the spinner, so that the art would continue. The steps involved are to ret it, break it, skutch it and hackle it.

“In the 18th century, a young girl would be expected to pull ten pounds of flax per day which would make enough linen for a man’s shirt. Linen was a poor man’s fabric; the rich wore wool and cotton. The flax is planted at the first of March. When the seed pods turn down, or after 100 days for really fine linen, the stalks are pulled. The retting process, which separates out the fiber, takes up to a week.”

Trish processes her flax in a horse trough and changes the water every 48 hours. The flax is then dried before breaking it, skutching it and finally combing it with a hackle. By the end of July, the hair-like fiber is ready for the spinning wheel. Trish has tried spinning linen in and says it requires moist fingers. Once spun, the linen yarn is ready for the loom.

In today’s world flax is either grown for seed or fiber, but usually not both, since the stalk is very woody by the time the seed is fully formed. Commercial flax is harvested by machine. Nebraska is one of the leading producers. The plant blooms briefly before forming seed pods and Trish speaks of the beauty of a flax field in bloom with its blue flowers. 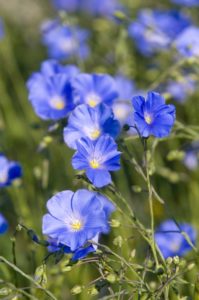 Trish often demonstrated the dressing process at historic houses. An audience of older Romanian women at Polar Forest remembered dressing flax in their youth. As a result, Trish was interviewed for a Romanian magazine, although she has never seen the article. Trish worked at the Old Coast Guard Station in Virginia Beach, First Landing State Park and the Chrysler Museum and often gave presentations at small museums.

In 2011, Trish and David moved to Williamsburg and decided to start their own historic tour company, Williamsburg Walking Tours, which opened in 2012. Trish says, “I wanted to portray history accurately, and tell stories about the good and the bad.”

They currently offer three tours: Walkabout History, which covers 1699 through the restoration of Williamsburg; Civil War Tours; and African American History in Williamsburg, 1619 through Reconstruction. The Williamsburg Walkabout tour becomes Williamsburg Door-to-Door Christmas for the month of December. The one and a half hour tours are available 12 months a year. As Trish shares her stories, she admits that the tours sometimes go overtime. Her enthusiasm and wealth of knowledge bubbles out as she speaks.

Among Trish’s favorite clients are the students from the Virginia Department for the Blind and Visually Impaired School in Richmond. Local Lion’s Club member Jack Trotter, along with other local Lions come to assist this tour each year. “Many of the students are just learning to use their sticks and the terrain mix of grass, pavement and cobblestones can be overwhelming,” Trish says. Trish and David were honored to be invited to graduation ceremonies at the school.

Their company also takes PowerPoint presentations of their tours on the road and frequently present customized programs to family reunions of families with history connected to the area.

“Often, elderly members are not able to walk very far, so we bring the tour to them,” Trish says. “We research connections to their family or to a particular state or location.”

Trish and David added the Civil War tour after she read the book, Defend This Old Town by Carol Kenttenburg Dobbs. “During the Civil War, Williamsburg was full of amazing single women. Their everyday stories are both funny and tragic.” Williamsburg was a closed city and considered a safe place, but food was scarce and many of the formerly prominent families became insolvent.

Trish says, “A visitor in 1870 noted that many houses had been torn down for kindling, firewood and bricks. Those who left their homes lost them. Union soldiers took what they wanted.”

Trish says Williamsburg before Rockefeller was a pleasant 20th century town, as can be seen in the Harvard Archives film, shot in 1930. In 2014, a Colonial Williamsburg photographer videoed the same route. The two films can be seen side-by-side in the video, Williamsburg Then and Now which is available on YouTube. Local reaction to the restoration was mixed and Rockefeller was, after all, a Yankee. But as some local women were quoted, “Yes, but he’s our Yankee.”

By using stories such as this, Trish and David augment the mission of Colonial Williamsburg and the sharing of subsequent history. Trish is a lifelong learner and continues to research local history through letters, papers and journals, always looking for more stories. She is fascinated with the people of the area and stories of how they lived and she is equally interested in the people who join the tours. “My favorite part,” she says, “is that by the end of the tour, I have always learned something new.”

For Trish Thomas, lifelong learning about history is a passion. Today, she and David use their knowledge and enthusiasm to make history come alive for others.