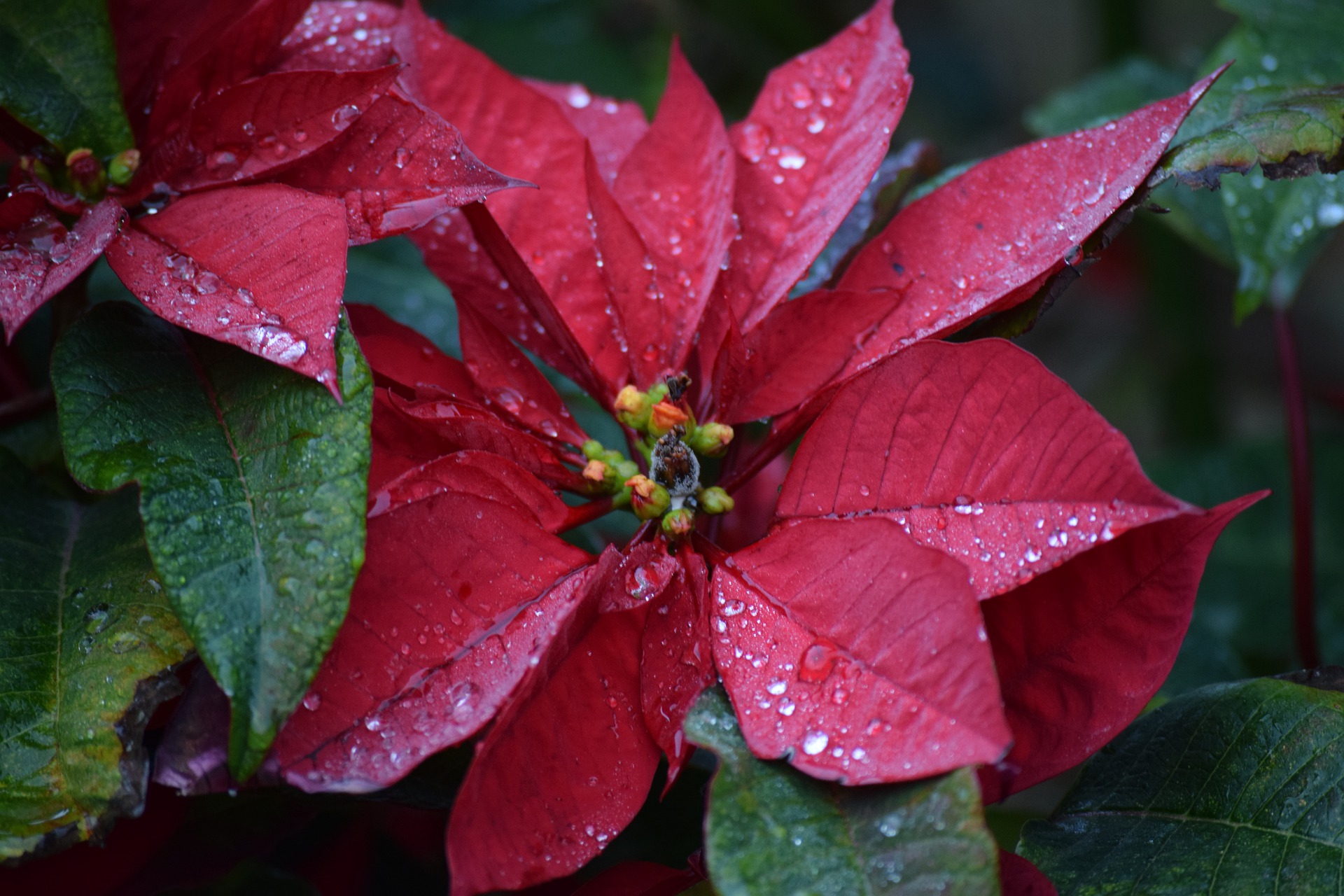 A Poinsettia By Any Other Name…

Poinsettias were named for Joel Roberts Poinsett, who was appointed Ambassador to Mexico in the 1820s by John Quincy Adams. He was also an amateur botanist. While in Mexico he started sending plant specimens to his home in South Carolina, one of which we have come to call the Poinsettia.

When Mr. Poinsett returned home from Mexico he started propagating and selling the plants as a Christmas Flower.  It is said he made a small fortune on this. However, Mr. Poinsett did not create a poinsettia empire the way Paul Ecke did in the early 20th century. More about that later.

First… A brief history of the Poinsettia.

The Poinsettia plant originated in Mexico and Central America. The Aztec people called the plant “Cuetlaxochitl” which literally means “the flower of leather petals.” The Mexican people believed that all flowers were gifts from the gods, not only because of their beauty and scent but also because they were metaphors of the most beautiful feelings. Before the Spanish arrived in Mexico, the Aztecs considered this plant to be a symbol of the new life of fallen warriors who would return to Earth as butterflies and hummingbirds that would sip the nectar of the Poinsettia.

We call the poinsettia a flower, but it is not. The showy red part of the plant is not made of petals; these are called bracts, a form of modified leaf. The yellow part in the middle is called cyathia. When this part sheds its pollen, the bracts fall off. (For the longest lasting Poinsettias choose a plant with little or no yellow pollen showing.)

The colors of the bracts – red, white or pink — are created through “photoperiodism,” which means they require twelve hours of darkness for up to five days in a row to change color.

After the Spanish converted the Mexican and Central American people to Catholicism, the name of the plant changed to “Flor de Nochebuena” or the Christmas Eve Flower. The symbolism given was that the red flowers represented Christ’s blood, and the white flowers His purity.

Legends and folklore grew up around the Poinsettia. One popular story is about a poor girl named Pepita who lived high up in the mountains in Mexico.  Pepita was too poor to buy a gift for the Baby Jesus. An angel told her to get an armload of a certain weed. Pepita did as she was told but she was still crying and, as her tears fell on the weeds, they produced beautiful red flowers.

To us the Poinsettia is THE plant to give at Christmas but once upon a time at Christmas there was another plant given at the holiday season — the Capsicum Annuum. Yes, the Red Hot Chili Pepper!

The chili pepper plant has been used as a decoration since at least the 16th century. It is believed the Capsicum Annuum originated in Central Mexico 6,500 years ago. It is documented in Italy in 1526 and in England in 1648. In Europe chili peppers were grown as ornamentals. Only later were they incorporated into cuisine, since hot ingredients were not valued in Europe at the time.

Chili peppers traveled from Mexico to Europe and Africa via the Columbian Exchange. Later, they traveled to the Caribbean Islands and from the Islands to Virginia and other Southern colonies. Mary Randolph incorporates them into several of her recipes in her book, “The Virginia Housewife.” She believed the use of hot peppers “should be discreet; just enough to brighten the taste not to set it on fire.”

Chili peppers were often given as gifts at Christmas. A full red and green at this time of year, they are bright and beautiful and practical. But the chili pepper as a gift would go out of favor because of Paul Ecke.

Ecke lived in Hollywood California at the dawn of the 20th century. He grew flowers and vegetables to sell to local markets. One day he and his son were hiking in the hills when they came upon some poinsettias. They decided to pick some and try to sell them, as well.

Customers fell in love with these red and green beauties. By the end of that Christmas season, Paul Ecke realized a fortune could be made in growing Poinsettias. He abandoned all his other crops to devote his time to researching, hybridizing and distributing the poinsettia plant.

By the 1960s the poinsettia market started to grow, and the Ecke family wanted their plants to reach beyond Southern California. But how?

The rise of the Christmas poinsettia pushed the chili pepper out as a Christmas gift.

But a new tradition was born.